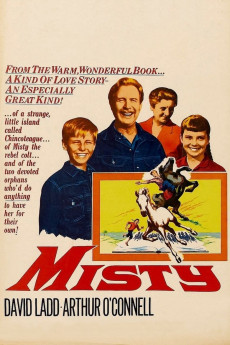 Drama / Family Every year the Chincoteague fire department rounds up the wild ponies of Assateague Island, and then auctions off the colts and yearlings to thin out the herd. A young brother and sister, Paul and Maureen Beebe, have set their hearts on owning one particular wild three-year-old pony, The Phantom. Only they have to earn the money, the Phantom has to be captured in the roundup (which she never has), and then they have to outbid everyone else for her in the auction. And even the Phantom herself has a surprise for Paul and Maureen: a foal named Misty. —Kathy Li